Midge and… Milo Ventimiglia?! Find Out All About The Marvelous Mrs. Maisel‘s New Cast and More for Season 4Party in the USA! Find Out Who’s Performing (Blake Shelton! Coldplay!) at Macy’s 4th of July Fireworks SpectacularHe’s the Dad! Everything You Need to Know About Channing Tatum as a Father 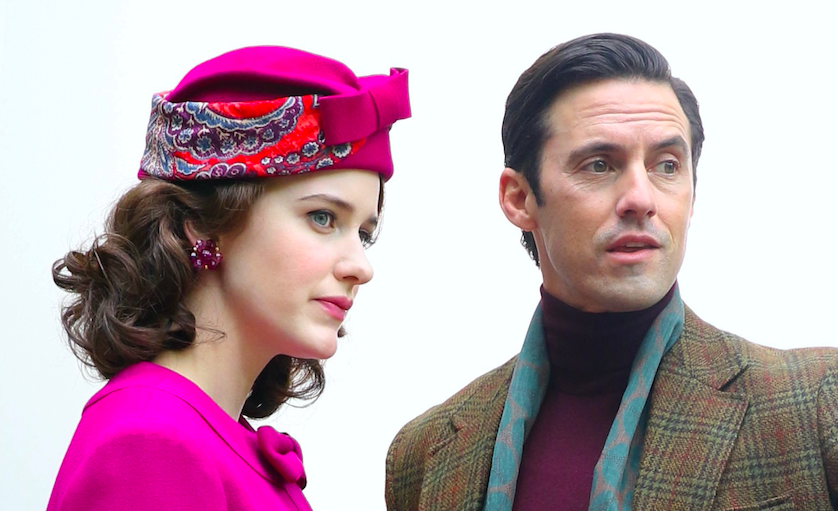 No punchline here, Marvelous Mrs. Maisel fans: More Midge is on the way—and as the world recently learned, the Emmy-winning comedy’s fourth season is shaping up to be a mini-Gilmore Girls reunion in more ways than one!

While the global pandemic delayed production on Season 4 of the Rachel Brosnahan-led Amazon Prime series, filming finally began in early 2021. Since then, on-set photos have shown that Maisel’s husband-and-wife creative team, Amy Sherman-Palladino and Daniel Palladino, are bringing back even more of your faves from their other iconic series, Gilmore Girls. To find out who’s joining the Maisel cast, when we’ll get new episodes and more, keep reading to catch up on everything we know about The Marvelous Mrs. Maisel Season 4.

Get ready to see a bunch of beloved stars joining the show in Season 4. Back in March, Variety reported that filmmaker and actor John Waters had joined the cast. “Waters will be appear in a guest starring role,” the outlet said, “with the exact nature of the character he is playing being kept under wraps.” Since then, he and Brosnahan have been photographed sitting together in costume while shooting a scene in a Manhattan park.

But wait, there’s more! In June, two of Gilmore Girls‘ A-list alumni were also hired on for Season 4 roles. First, This Is Us star Milo Ventimiglia—i.e. Rory Gilmore’s bad-news boyfriend, Jess Mariano—came aboard in an undisclosed role. (Fun fact: Ventimiglia is also the second This Is Us star to do Maisel after Sterling K. Brown guested on Season 3!)

Like Waters, Ventimiglia been shooting in New York City alongside Brosnahan as well.

Way back in 2018, Sherman-Palladino told Variety about finding a Maisel role for Ventimiglia, “It’s got to be the right part. It can’t be just a cameo. It’s got to have some meat to it. And it’s also got to be a time when he can shave and cut his hair into a 1950s-period look. But the reuniting will definitely happen.”

Just a couple weeks after Ventimiglia joined the production, Maisel had even more Gilmore-related casting news: Kelly Bishop, a.k.a. Gilmore matriarch Emily, had also been given a new guest-starring role. And judging by a teaser video the show shared, Bishop’s new character is going to be just as stern, strict and judgmental as good, old Emily Gilmore.

If looks could kill. Ladies and gentlemen, please welcome Kelly Bishop to Season 4 of The Marvelous Mrs. Maisel! pic.twitter.com/5Veko919zO

Related: 19 of the Best Quotes from The Marvelous Mrs. Maisel About Life, Love and Being a Woman

Yes! The Emmy-award winning series is currently in production in New York City. Rachel Brosnahan, who plays Miriam “Midge” Maisel, previously told Parade.com that they were planning to start shooting in January after being delayed due to COVID-19.

On September 23, Brosnahan shared a photo from her first Season 4 costume fitting. “Mask game strong. Hat game stronger,” she captioned a photo of herself in costume, while sporting a face mask. “We’re slowly and safely getting back to it but first costume fitting is in the books Damn, it feels good to be (almost) back.”

Alex Borstein, who plays Midge’s manager Susie, cited the safety of the cast and crew as a big factor for the production delay. She explained to Parade.com in August, “We want it to be as safe as possible for everyone. As an actor you’re pretty isolated, you’re able to get private transportation to and from the set, but a lot of your crew isn’t, so it’s really not fair to try to go back to work before it’s safe for everyone.”

That same month, showrunner Amy Sherman-Palladino revealed to The Hollywood Reporter that they are “ready” to begin filming. Daniel Palladino added, “King COVID is the master of us all right now. It remains to be seen whether productions are going to be fully running before there’s a vaccine. It looks daunting.” Palladino noted that while they “know what happens in Season 4,” none of them really know when they are “going to be producing these things.” He said, “We’re all just sort of crossing our fingers and hoping for the best.”

Related: You Can Now Make Midge’s Famous Brisket from The Marvelous Mrs. Maisel

Sadly Borstein had “nothing” to share when asked for teasers. “Honestly, I’ve got nothing. I know nothing,” she confessed to Parade.com. “I know that Amy [Sherman-Palladino] knows exactly what’s happening, but the tiny things that I might know, I would be slaughtered if I shared them. But, honestly, I don’t know Susie’s arc, and I have no idea what will happen in terms of giant storylines.”

Season 3 wrapped with Midge being fired by Reggie from Shy’s tour on an airport tarmac after she made “some jokes that hit too close to home” the night before during her act. According to Sherman-Palladino, the new season is going to “pick up right after that.” She said, “We may be doing a little jump within the season, but when we first start up we want to [stay in that time]. I mean, what’s the fun of totally destroying someone’s soul and heart and not getting to see the aftermath? That’s what comedy’s made of, soul-crushing defeat.”

Parade Daily Celebrity interviews, recipes and health tips delivered to your inbox. Email Address Please enter a valid email address. Thanks for signing up! Please check your email to confirm your subscription.

Sherman-Palladino acknowledged that the show “f*cked [Midge] up pretty good” at the end of the last season. “We’ve knocked her back a few times on the show. But that’s what show business is. It’s one step forward, two steps back — that’s the life of a comic,” she pointed out. “And let’s not forget, we’re still talking about a female comic in 1960. It’s hard enough for a female comic to get a toehold today, but forget about the ’60s when there were, like, four of them.

The showrunner continued, “Knocking her back is never going to be the problem. We’ve got a thousand ways to take her down. It’s following her world and her trajectory that tells us what to do with her.”

Both Seasons 2 and 3 had December premiere dates, but it’s unclear when Season 4 will drop. Check back for updates!

Not yet, but we’ll be sure to add once it’s released.

Ahead of Season 4, here is a recap of what happened in Season 3…major spoilers below:

After ending her engagement to Benjamin with a “Dear John” letter, Midge hit the road opening up for Shy Baldwin on tour. Back in NYC, she decides she wants to buy the apartment her ex-father-in-law had purchased for her and Joel. Midge explained that her manager has been holding on to all her money so she can purchase the pad for her and her family. Before beginning the second leg of her tour in Europe, the comedienne hits the stage at the famed Apollo Theater. “Shy’s like family to these people,” Reggie tells a nervous Midge prior to her set. “They want to hear stories about him. Stories about the road. Late night craziness, gossip, tantrums.” Before boarding the plane the following night, Reggie informs Midge that she’s not going on tour because Shy changed his mind and doesn’t want her to open up for him anymore after she made personal jokes about him, including his “Judy Garland shoes.”

After gambling away Midge’s money in the finale, Susie goes to Joel and asks him to take care of his ex-wife’s finances and “protect it from now on.” When he asks why him, she declares, “‘Cause you love her! You’ll always be in love with her. You won’t let anything bad happen to her, ever.” Susie ends up missing Midge’s set at the Apollo to set her late mother’s house on fire so she can claim the insurance money. “The insurance will cover Midge’s portion of the money I lost, that’s what’s important,” she tells her sister.

Joel started the season looking for a place to open up a night club, which he does in Chinatown. The spot has a “scary mystery door” that leads to a room where gambling takes place. The dad of two also strikes up a romance with a woman named Mei Lin.

Midge’s parents struggled to adjust to their new living situation in Queens with their former in-laws, Shirley and Moishe Maisel. The Village Voice newspaper wants Abe to be their theater critic, while Rose uses her matchmaking skills to set couples up. Although Rose doesn’t understand her daughter’s life, or why she does what she does, she and Midge are in agreement about “how precarious a woman’s life is, when it’s dependent on the whims of a man,” a lesson Rose said she has learned “the hard way” after Abe blew up their life, and now it’s up to her to get everything back.

It looks as though you’ve already said that.

You seem to be logged out. Refresh your page, login and try again.

You are posting comments too quickly. Slow down.

Your account was created. An email has been sent to you.

Get the Parade Daily:

health tips in your inbox.

Get the Pop Kitchen Newsletter: recipes and handy kitchen tips in your inbox.

Get the Healthy Now Newsletter: good vibes and health tips delivered right to your inbox!

Get the Pop Shop Newsletter: fabulous finds delivered right to your inbox!

conditions of our User Agreement and

Everything We Know So Far About America’s Got Talent Season 16, Including All the Golden Buzzers

Which One of These 100 Diets Could Help You Lose Weight? We’ve Got Tons of Info to Help You Decide

Face Your Fear Street! Everything You Need to Know About Netflix’s New Horror Trilogy

These Red, White and Blue Drink Recipes for the 4th of July Are As Patriotic As They Are Pretty